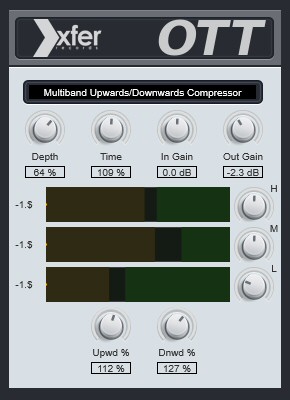 Available from Xfer Records (and a variety of other places) the free,  OTT (Over The Top) plugin is a multiband compressor. Practically, for me, this means it cleans up any mix on which I use it. If you want to hear how much mid frequencies are muddying up your mix, just drop this plugin onto the master mix, then toggle it on and off.

There is much more to this plugin than that and for the best results, this should be adjusted for each individual mix. In my opinion, for the best results, apply instances to different groups of tracks and not on the master track at all. For example, I might use an instance for the drums, a separate instance for vocals, another for all other instruments (as a group) because each of those tracks or groups of tracks will sound best with a different configuration of OTT.

I’ve listed the steps that are shown in the video, as a reference for use after watching the video. The video that follows, does a very good job of explaining how to use OTT and making it easy to understand how to get good results for your mix.

A few other things to consider when using this plugin.

Don’t be fooled by a volume increase. Ensure that the volume of your mix is the same with or without the plugin enabled. Louder can sound better even if a plugin isn’t doing anything other than increasing the volume. You want to ensure the tone is better, not just that everything is louder so be sure to adjust the output gain when comparing the mix with and without the plugin enabled.

When you first enable the plugin, your mix might sound worse, but literally after a few seconds spent on step 1 above, you’ll hear an instant improvement.

The following video explains and demonstrates the above steps. 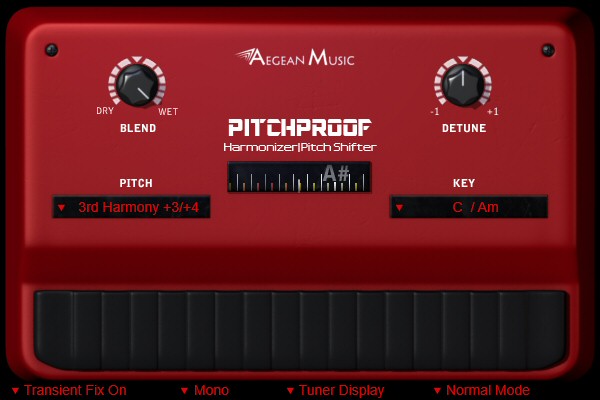 From the Pitchproof web site:

Pitchproof is a free audio plug-in that can shift the pitch of the input. The effect is meant to combine old styles of pitch shifting with the quality you expect from modern plug-ins. The result is this pitch “pedal” simulation that has most of what is great about guitar harmonizer pedals, and still preserves the signal’s integrity.

I use it as a vocal harmonizer. With a few added tricks, the effect is sufficiently convincing in a mix. In isolation it can sound like chipmunks but use the tricks below and blend it appropriately with the lead vocal and you have instant harmony. As outlined in the video below, do the following to improve the quality of the harmony.

The following video by MusicTechHelpGuy demonstrates the above tips.

A long, 2 part, live composing video stream worth watching. What I find particularly interesting is his use of scale runs in the woodwinds.

Total time of these videos is over 5 hours but even so, he’s fairly efficient and spends almost all that time directly working on his composition 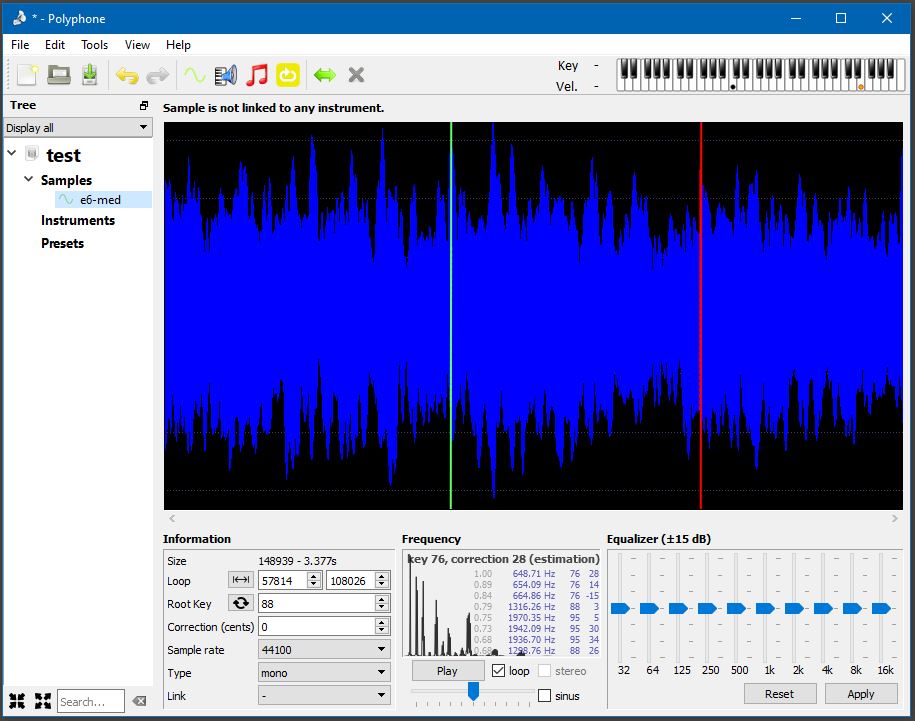 To use this for looping, first create a new instrument (though there will be no need to save that instrument anywhere), using File > New. I just create an instrument called “temp” or “test”. It doesn’t matter because I won’t save the instrument.

Next, drag and drop a .wav file over the “Samples” label on the left side. Having done that, a blue waveform as depicted above should appear.

The simplest thing to do next is to let Polyphone scan the entire waveform to find a good loop point. Pressing the yellow loop icon near the top will begin the quick process.

This often works but it’s sometimes best to restrict the search to an area of the wave form that you can see is mostly stable. I have done that in the picture above. To first set the end point of the search area, simply click the right mouse button somewhere in the wave form. Then click the left mouse button to set the start point.

As before, click the yellow loop icon to create a loop.

Press space bar to toggle the playing of the looped sample.

Once the loop is sounding good, select File > Export Samples to choose the directory where the looped sample is to be placed.

“Motif: a short succession of notes producing a single impression; a brief melodic or rhythmic formula out of which longer passages are developed”

… and make a few simple changes to expand it into a verse or chorus. The idea expressed in this video is to come up with a small melody idea and be able to repeat it 3 times but each time changing it just enough to keep it interesting. This strikes a good balance between something familiar for your listener while at the same time, providing something new with minimal effort.

There are many methods for altering a motif that I won’t list here, but this video shows 2 examples that should be easy to re-use in your own composing efforts.

I’ve seen the transcribing of other people’s music recommended many times as a way to learn the art of orchestration and composition. The idea is to get a recording of a classical piece of music, attempt to recreate it by listening to it, performing the parts you hear into your DAW and then checking the actual conductor’s score to correct any mistakes. Doing this for a while will help to recognize patterns and be able to re-use those patterns to compose our own music.

There are places that sell conductor’s scores but I’ve found another interesting (free) way. Some live composing videos on YouTube are detailed enough that you can see exactly what is being recorded, by seeing the composer’s hands on a piano as they record a track, or seeing the piano roll in enough detail to figure out exactly what notes were recorded.

I would recommend performing a YouTube search for “live composing”. This will lead you to videos of composers as they work on a new piece of music. You can see step by step exactly how they do it.

Here are some of those videos (if you’re interested in epic/trailer style music):

In the following video, by carefully watching his hands, you should be able to figure out exactly what is being played so you can create your own version for studying.

This next 2 part video series walks you through a live composition that eventually is submitted to be considered as background music for use on T.V.

Does melody even matter? – by Nick Murray

Does Melody Even Matter – Part 2 – By Nick Murray

How I make EPIC CINEMATIC MUSIC – bY Olexandr Ignatov

A short video demonstrating the sound of doubling, in unison, various combinations of instruments. I thought this video would make a useful reference. The instrument combinations demonstrated in the video are:

A short video but I found it interesting how the composer starts by creating a 4 bar loop in his DAW, adds one chord per bar (Dm, C, Gm, Am), then while the loop is still playing quickly adds accompaniment. This seems like a good idea for quickly generating ideas.

The elements of this composition are as follows (in the  order they were added to the video):

What I would do after what the composer has done, is go back and pull apart the added accompaniment so it eventually builds up to the point where all the accompaniment is playing. I’d try mixing and matching the accompaniment, perhaps repeat the whole process to create a B section then put everything together for a complete composition

This video demonstrate a few good techniques for smooth transitions between chords. My explanations below, taken from the video (far below), assume a general knowledge of scales and chords. The techniques used in the video are:

2. Chord inversions, or voice leading. For smooth chord transitions, it’s best to keep the distance between adjacent chords to a minimum. For example, if transitioning from a C (CEG) to an F (FAC) chord, recognize which notes both have in common and place those notes in the same position in each chord. Look at the difference in movement to get from one note to the other in these 2 examples of transition from a C chord to an F chord.

This is good voice leading with minimal movement between a C and F chord (C root position to F second inversion or C to F/C):

This example is more movement which will not sound as smooth between C and F chords (C root position to F root position):

3. Suspended chords. A suspended chord is achieved by moving the 3rd of the chord up or down. This is a useful way of providing a smooth transition between chords that have no common note. For example, to transition from a C (CEG) to a Dm (DFA) a suspended chord can be injected between the two as a short transition chord. In the following example, the 3rd in the C chord (the E) is raised to F to create a Csus4 chord. This means the 3rd has been suspended and replaced with another note.

4. Anticipation. This involves playing a note from the next chord, early in anticipation of the new chord. A suspended chord achieves this but this can also be achieved by anticipating any note in the new chord:

… or both can be used one after another for an even more smooth transition, first the sus chord, then the anticipation:

The above is meant as a brief summary or reference. This is best understood by watching the video from “Hack Music Theory” which demonstrates these concepts very well.

This short video shows some simple steps to easily create a harmony for your melody, whether the harmony is for a vocalist, a piano or an accompanying instrument.

If the high and low harmony notes are played together, they form a chord with the melody note, so adjustments may be necessary if the harmony forms a diminished chord (which may sound too dissonant). Try lowering or raising a harmony note to avoid this.

All this is demonstrated in the video below.

How to find harmony the easy way – (by Quincy Kane Morris)